You are here: Home / What are baby ear deformities? / Cryptotia Ear Deformity

Cryptotia is a congenital (present at birth) infant ear deformity characterized by an auricular muscle abnormality that causes the upper portion of the external ear cartilage to be partially buried underneath the skin on the side of the head. Because a portion of the ear is beneath the skin, the condition is sometimes referred to as hidden ear, buried ear, or pocket ear deformity. 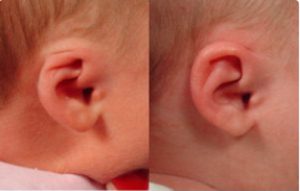 While the upper part of the ear may appear to be missing, the ear cartilage framework is actually present under the skin. In some cases of cryptotia, the buried portion of the ear may present with other malformations as well.

The cause of cryptotia is not known, however it does occur more commonly in people of Asian descent (reports show up to 1 in 400 births). It typically does not affect hearing however, wearing eyeglasses or sunglasses is often difficult or impossible as the temple pieces of the glasses have no resting place. Studies also show that cryptotia can affect self-esteem and result in teasing as the child becomes old enough to attend school.

Can Cryptotia be Corrected Without Surgery?

While most congenital ear deformities require seeking medical treatment shortly after birth to enable non-surgical correction, cryptotia can often be treated without surgical intervention well beyond the neonatal time window (even up to age 5). In cryptotia cases where the cartilage framework is normal but simply hidden under the skin, ear molding can be a treatment option that can be utilized for a longer period of time since the cartilage does not need to be soft and pliable at the time of correction as in many infant ear deformities.

First, the Earwell™ retainer tapes are applied in order to:

Approximately two weeks later, the molding portion of the four piece Earwell™ System is placed to reshape the released cartilage.

Benefits of the EarWell™ Infant Ear Correction System include:

Surgical ear reconstruction (otoplasty) for cryptotia involves dividing muscle fibers through a small incision. The available skin is moved from the depression behind the ear (auricular sulcus) to the needed portion in the superior area of the ear. Several correctional surgery options are available for cryptotia treatment and are recommended on a case by case basis. Most cryptotia surgeries involve the use of skin flaps however, skin grafts may be necessary when the condition is severe.

Goals of cryptotia surgery are:

Cryptotia ear deformity repair is typically performed under general anesthesia on an outpatient basis, and the patient is able to return home the same day as surgery.

If your child has symptoms of this ear deformity, please see our physician locator for a list of experts who are qualified in treating cryptotia with The Earwell™ Infant Ear Correction System. For patients who require surgical correction, we are pleased to offer referrals to plastic surgery experts who are highly skilled in performing otoplasty.