You are here: Home / What are baby ear deformities? / Ear Lidding Deformity

Ear lidding deformity is an infant ear deformity that is present at birth (congenital) and is characterized by a folding over of the upper portion of the ear similar in appearance to the lop ear deformity. Ear lidding deformity is caused when the antihelical fold (curved cartilage in the top center of the outer ear) fails to develop completely. Without the support of the fully formed cartilage, the top of the ear folds over in varying degrees depending on the extent of the antihelical fold development. An ear lidding deformity may involve only the helical rim (outer curved edge of the ear) or could include the entire upper third of the ear. While lidding can be one of the symptoms of constricted ear or lop ear, these deformities involve a partial absence of cartilage and skin while lidding does not. Lidding presents in over 25% of all infant ear deformities. There is a possibility of slight improvement in lidding during the first week of life, however after seven to ten days, the ear typically maintains its shape.

Can Ear Lidding Deformity  Be Corrected Without Surgery?

Ear lidding deformity is one of many congenital ear deformities that can be corrected non-surgically with the Earwell® Infant Ear Correction System. Seeking treatment early (within the first few weeks of life) is key in being able to utilize this innovative treatment for reshaping your baby’s ears without the need for incisions, anesthesia, or surgery. 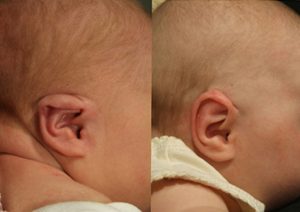 Early intervention is necessary because the ears at this time of life are soft and easily pliable due to high levels of estrogen from the mother still in the infant’s body.

The Earwell® Infant Ear Correction System is comprised of four components which work together to mold the newborn’s ears into the proper shape. The Earwell System can be placed on your child during a short office visit and is then worn for approximately four to six weeks, depending on the severity and complexity of the condition being treated.

While ear lidding deformity does not typically result in hearing loss or difficulty, many parents worry about misshapen ears as a source of teasing and bullying later in life. In the past, parents had to wait years and weigh the pros and cons of ear reconstructive surgery. Now, with the latest technological advances, The Earwell™ Infant Ear Correction System offers a reliable, safe, non-invasive solution for lidding that can be completed within weeks after birth.

After the time window for ear molding has closed, the recommended method of correcting lidding ear deformity is surgical ear reconstruction (otoplasty). Otoplasty is recommended to be performed after the ears have reached their mature size which is usually between the ages of five and six. This minimizes the chance of future ear cartilage growth being affected.

During ear lidding otoplasty, which is performed under anesthesia, abnormal cartilage is reshaped and/or manipulated to give the ear a normal appearance. Otoplasty is often performed at a day surgery center or hospital as an outpatient procedure and is usually completed within 2-3 hours. Incisions are made at the back of the ear or within the natural folds of the ear to hide any scarring.

Common techniques used during otoplasty include:

Internal sutures may be used to secure ear position, and dissolvable stitches will be used to close any incisions.

If you have a newborn and are concerned about ear lidding deformity, please use our physician locator for a list of trained specialists who are experienced in placing the Earwell™ Infant Ear Correction System. For those patients who are unable to benefit from The Earwell™ Infant Ear Correction System, we are pleased to refer you to a plastic surgery expert skilled in performing otoplasty for ear lidding.