You are here: Home / What are baby ear deformities? / Protruding Ears

Protruding ears, also called prominent ears, are one of the most common types of infant ear deformities, affecting about 5% of the population worldwide. The ears are considered to be protruding if they extend more than 2 cm from the side of the head. 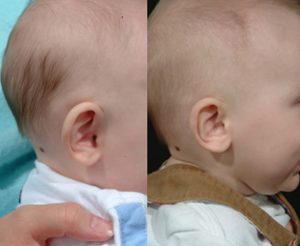 Protruding ears typically present bilaterally and occur when the antihelical fold (part of the Y-shaped cartilage near the center of the outer ear) does not form properly or is underdeveloped which causes the outer rim of the ear (helix) to stick out. In many cases of protruding ear, the concha (bowl-shaped portion of the ear just outside the ear canal) has an excessive amount of cartilage or is unusually deep resulting in the entire ear being pushed away from the side of the head. Protruding ear, like most infant ear deformities, is usually a congenital condition (present at birth). Many people with prominent ears have a family history of the condition.

Protruding ears typically do not cause any problems with hearing, however, can be a cause of psychological distress because of the effect on facial appearance. Studies show that protruding ears can be a catalyst for teasing, especially in children, and a detriment to self-esteem due to the aesthetics involved. Because of these psychosocial concerns, protruding ear correction is often desirable for new parents.

Can Protruding Ears Be Corrected Without Surgery?

Treatment for protruding ears can involve surgical or non-surgical methods depending on the age of the patient. At birth, the ear cartilage is soft and pliable and can be reshaped without surgery using an innovative technology developed in recent years, The Earwell™ Infant Ear Correction System. As time passes, the ear cartilage becomes more rigid, making corrective ear surgery (otoplasty) the best treatment option. Therefore, early intervention is key in being able to correct protruding ears without surgery.

Benefits of the EarWell™ Infant Ear Correction System include:

Once the ear cartilage has begun to calcify, or harden, non-surgical methods of correcting the ears are not usually the recommended treatment since the success rate decreases as the cartilage becomes less malleable and harder to manipulate. The ears grow to their mature size between ages five and seven. This is generally the recommended time for your child to undergo corrective ear reconstruction (otoplasty).

Otoplasty for protruding ears may utilize a combination of two different procedures:

Incisions made during protruding ear correction are placed in the natural fold where the ear meets the head whenever possible. It is important to select a plastic surgeon who is skilled at both of these procedures to prevent recurrence from the excess cartilage becoming stretched.

If you have a newborn and are concerned about protruding or prominent ears, please utilize our physician locator for a list of experts qualified in placing The Earwell™ Infant Ear Correction System. We are also pleased to refer you to an experienced plastic surgeon highly skilled in performing otoplasty for patients who do not qualify for The Earwell™ Infant Ear Correction System.